Fleas are both nuisance pests and a health risk to their victims. The parasite feeds on blood from animals and humans, with the former being the more preferred. Unlike the ant, earwig, stinkbug, and box elder bugs, the flea does not infiltrate homes. Instead, the insect is brought into the home by one of the occupants. Whether the unaware culprit is an animal or human, the home is at risk of a full-blown infestation.

As a nuisance pest, the flea torments its victims through bites. The insect injects saliva that contains an anesthetic-like substance that numbs the victim’s skin before each feeding. Shortly afterward, the insect penetrates the victim’s skin with its feeding tube. The numbing properties are supposed to lessen the detection risks, allowing the flea to feed without disturbance. Of course, it rarely turns out this way because most victims can easily detect flea movement through light vibration.

Fleas are a constant problem for Detroit pets and their owners. Even homes that are not occupied with pets are at risk as well. The most common flea sighting in the City of Detroit is the cat flea “Ctenocephalides felis,” which is identified by its flat body, long flexible legs, and reddish/brown coloration.

The flat body allows the flea to maneuver freely through dense animal hair and escape the capture of human fingers. Another feature that helps the flea escape capture is a jumping capability. Fleas have amazing jumping capabilities – horizontally and vertically.

The cat flea’s target is not limited to the feline (cat). Deer, raccoon, opossum, canine, ferret, squirrel, and fox are all victimized by cat fleas.

What Are The Most Common Characteristics Of A Cat Flea Bite?

As a health risk to animals, the flea notoriously victimizes its prey. The insect feed at least two a day when an animal host is accessible. When animal blood is not available, the flea will turn to human blood. Both serve the same purpose, as far as the flea is concerned. Flea bites cause a mild allergic reaction in most cases. A mild allergic reaction to a flea bite is a tiny pinpoint-sized edematous, red bump somewhere on the victim’s body. Mild discomfort, such as itching is often reported by victims.

A severe flea infestation can lead to blood loss, flea allergy dermatitis, and death in rare cases. Flea bites have been associated with plague, tapeworm infection, and hair loss.

What Can I Do To Protect My Detroit Home From A Flea Infestation? 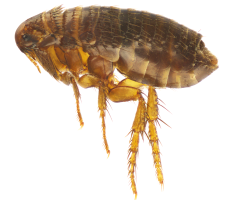